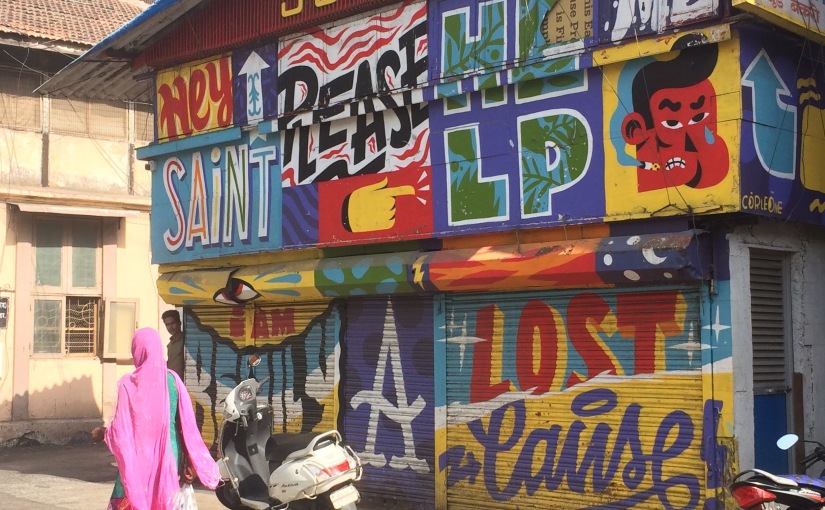 Day 1: I arrived in Mumbai at 3 in the morning. I got in the first available taxi and attempted to pull up directions on my phone and instructed my driver how to get to my hostel. By some stroke of the Google Maps Gods, we somehow made it to the hostel. We agreed on X number of rupees, but he didn’t speak English, I didn’t speak Hindi, I don’t know. He started yelling at me and locked me in the car until I paid the “appropriate” amount and left me on the side of a highway, in the dark, in Mumbai, at a hostel. I walk in, the front manager didn’t speak English and shoved me in a room and I went to sleep in my dirty airplane clothes.

Day 2: This was my 8th country during my fellowship. I knew the drill. Find the bathroom, find water, find food, find the bank. I compare it to being like a baby. I need to be changed. To be cleaned. To be fed. Luckily, I met a friend in the hostel, Kyle. He was American, and he turned out to be my best friend in India. The funny thing is, I thought he hated me for the first 3 weeks of our friendship. Kyle took me to get my first meal in India, which were samosas from a street food cart. All I could think of while I was eating that delicious samosa was my Aunt telling me to not eat the street food because I could get really sick. I ate it anyway. And another. And another. I felt like a ticking time bomb, but nothing happened. If anything, I felt weird from overeating!

I usually give myself time to acclimate to the country. Get to know the area, see which neighborhood do I want to live in, how to go grocery shopping, etc. By some stroke of luck, I discovered my suite mate from junior year at Rice, Lavanya LIVES in Mumbai! We then decide to meet up that day at the zoo. It was so amazing to see a familiar face, let alone halfway across the world!

Day 3: I was incredibly lucky to be in India during one of the most colorful holidays of the year, Holi, which is the celebration of the arrival of Spring. Lavanya and her roommate invited me to celebrate at their apartment. I arrived at their place in the morning and ate breakfast with them, which consisted of cheese Lavanya’s dad brought over from the US. For people who don’t know, international cheese is incredibly expensive in India, so it was an incredible treat for them to share their treasures with me.

We then all go outside for the festivities. Everyone is outside in the streets! Old Bollywood classics are playing, children running around throwing colored powder and water balloons at everyone, food carts line up to sell snacks. All I can say is that I am so happy I remembered to bring a change of clothes! A couple of days later, I was still washing pink powder out from the inside of my ears.

Day 4: I was already done with the hostel life and sharing a room and bathroom with 10 other strangers. I ended up finding a nice private room in the neighborhood of Versova. I walk into the apartment to be greeted by a cat and my host, Rikky. Never have I thought that I would be such good friends with my Airbnb host and his cat, Zen (even though Zen and I had a tricky relationship with personal space). Not only did we instantly bond on our mutual love of Seinfeld and pulled pork sandwiches, but he also introduced me to all of his friends and helped me get situated in Mumbai. This included telling me where to eat, how much to pay for things, how to set up my phone, and explaining where we lived to my Uber drivers.

One of his friends was coincidently a musician who works for a musical non-profit from Australia, named Meera. We instantly clicked and she even let me tag along to some of her rehearsals. One day, Meera invited me to her Capoeira class by the ocean. Capoeira is a form of choreographed martial arts that originated in Brazil. It combines martial arts with elements of dance, all while being accompanied by Afro-Brazilian music. The music is an integral part to the entire art form because it sets the tempo and style of game that is to be played.

The real question here is: how is there a capoeira group in metropolitan Mumbai? The leader of the group, Sucuri, was taught by a Brazilian man who moved to India and decided to teach slum children the art of capoeira. Sucuri became so inspired and motivated that he now teaches and inspires an entirely new generation of children, regardless of social caste.

Along with his work in various slums in Mumbai, he leads an all-inclusive capoeira group where he would teach not only martial arts, but also the music. He would bring his own Afro-Brazilian instruments and teach songs to play and sing along to while two other people were battling it out.

That’s all for now folks. I just wanted to set the scene of my life in India. Next, I will share my interview with Deepa Unnikrishnan, or Dee MC, a well-known female rapper in Mumbai.

One thought on “Welcome to India!”