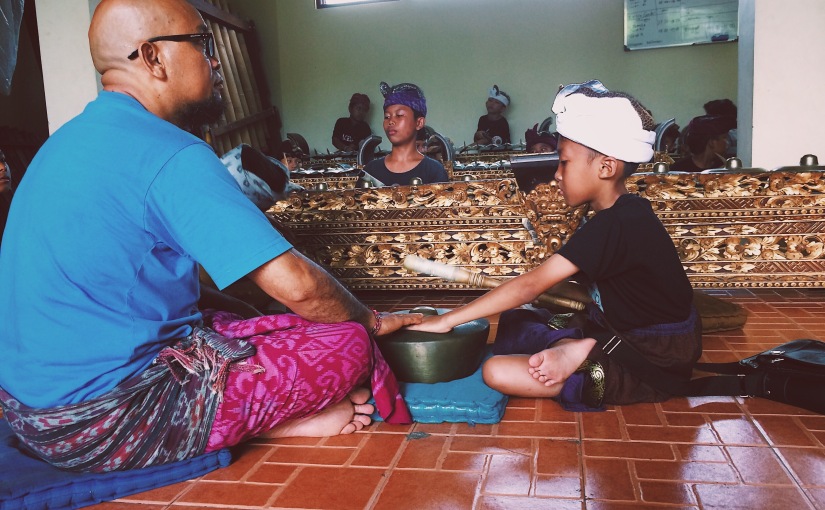 One day, Balot invited me to go to a children’s gamelan rehearsal lead by his mentor, I Made Subandi. The rehearsal took place at Made’s house, where he had his own personal collection of gamelan instruments. I arrived around the same time as the children did for their rehearsal and watched while everyone shuffled in. Just like the typical American soccer mom, the Balinese parents would drop off their children, but instead of a minivan it would be a motorbike. Instead of a soccer jersey, they would be dressed up in their traditional Balinese wear, which is much more complicated than some exercise clothes. Every little boy is required to wear this outfit (pictured below) even when just practicing gamelan. It’s a sacred act, so you must be dressed correctly to show respect.

It was time for rehearsal to begin. I sat in the front with Balot and observed how Made managed and taught the group of children. Balot would go to some of the students and play with them if they forgot a passage (remember, all gamelan in learned by ear), and Made would help keep beat or tell the group when they were moving onto the next session with number signs. When Made wasn’t instructing the kids (a couple of mere seconds here and there), he would ask me about my studies and what I want to get out of gamelan while simultaneously stuffing more and more Balinese snacks into my hands. “Try this! Now try this!” Made would say. He would eagerly wait to see my reaction after every snack. I tried a brand new fruit here called “salak”, or snake fruit, because the exterior looks like scales. 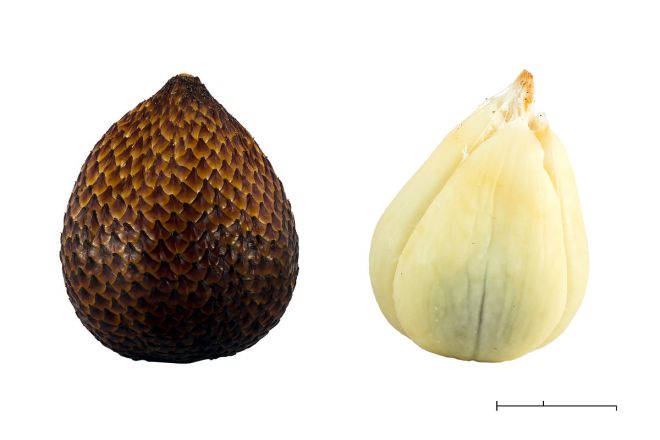 All of the children ensembles I saw today were only boys. Traditionally, Balinese children start studying traditional Balinese art as early as age two. The boys play gamelan, and the girls dance to the gamelan. Girls are of course welcome to join the ensembles, but it is a rare sight to see a girl among the boys. I met one of the few female gamelan players who actually help teach the children’s gamelan class that I saw. Her name is Ayu, and she is 16. After rehearsal, Ayu, Balot, and I went upstairs to talk away from the noise of all the children. Balot told me that female gamelan players are still seen as taboo to the older generation. They are seen at the came caliber of the children ensembles and are not taken as seriously as the male adult ensembles. I wanted to interview both Ayu and Balot, but Ayu did not speak english, so Balot translated for me. Here is a picture below of Ayu:

Ayu comes from a long line of musicians. Even though music has always been a huge focus in her house and her family, her father initially didn’t want her to do music. Ayu’s older brother also plays gamelan, and has been very supportive of Ayu’s similar passion. Her brother then told her father that he wouln’t continue to play gamelan if Ayu didn’t get to play in high school. After that little shock, the family then became completely supportive of Ayu joining Madu’s studio and the music high school in Bali.

Because of the negative stigma of being a female gamelan player, its difficult to get girls to be interested in playing. Unfortunately, Ayu didnt get as many opportunities to play as the average male gamelan player, but now being labeled as one of Made’s students, more and more people are wanting to see her play. She is seen as something rare among so many male players.

Just like Ayu, Balot’s parents didn’t agree with him being a musician, but more on the reason that it is not a suitable career to make money. Eventually his family finally came around to the idea because they trusted Made to mold and teach Balot. In Bali, if Made invites you to study with him, it is a huge deal and you should take the that opportunity. If Made saw something special in Balot, then his family has to trust that judgement and let Balot pursue music.

Made has an incredibly open mind when it comes to the battle of the sexes in music. He doesn’t see someone’s gender as a way to quantify their talent. He believes in the mind. The potential. There is more than just gamelan in the world. There is more to see. He is more interested in what is out there, while still respecting the Balinese tradition. Both Balot and Ayu have seen a significant difference in their playing and creativity after being taken on as a student of Made. They are taken more seriously and people look at them differently, with more respect for their craft. Because of Made, Balot has been inspired to become a composer and enroll in ISI, the arts institute in Bali. He has made Balot and Ayu really believe in themselves. Even though they both attend arts school, they feel that they learn the most here. Not only about music, but about the world and themselves. They have learned that music is more about how you respect one another.

Made teaches only a small percentage of technique, and the rest is learning from your emotions from the inside and learning how to pull it out of yourself. It is a process that is constantly progressing and growing. This process doesn’t see age. Balot, at the age of 29, has learned more about self-confidence from Ayu during their time here. He says you can always learn from the children, from their confidence. They see things more simply than adult. You do have to respect your elders in Balinese culture, but here, you also need to respect your youth. For Ayu, she has learned how to compose from Balot. From this, she has learned to use her music as a form of reflection and understanding of her inner self.

Just like Ayu, more and more women are being taken under the wings of gamelan teachers and given chances that were not initially there say, 20 years ago. Even though its still quite intimidating for the average girl to start gamelan, especially when the girls are initially put into dance as early as the age of 2, but women like Ayu show these aspiring women that it is possible to break through that barrier and learn. Many people are now asking Ayu to teach their children and want her to compete in multiple gamelan competitions around Bali. Opportunities for women are growing everyday.

I have learned that it is very Balinese to be competitive. Gamelan is an artistic war from one village against another. Sometimes, they even have people sneak over into the other village to hear what they are doing, and mimic it and make it better for the upcoming competition. The biggest lesson I think that Made has taught all of his students is that you need to play for yourself. Music is supposed to build you up, not break you down. He shows them that it is used for meditation, for positive growth, not only in your musical talent, but in your life. You can communicate how you feel through music.

What I learned from Ayu and Balot that day was absolutely priceless. As a classical musician, brought up in a strict ochrestral music style, college was a rude awakening. I lost the love of music early on in college and considered dropping it all together. I lost the fun in it. It did seem like a battle. I had to beat the person ahead of me. Something that was my therapy, my safe place, became this chore. Into my later years at Rice, I found more of a rhythm on how to turn out results and eventually get into the groove of enjoying the music I previously feared to play. But my self confidence really didn’t kick in until I graduated and went to Music Academy International before my Zeff year. That was the first time I was playing not to prove to anyone that I was worthy of being there. I was playing for myself. And I played so much better than I ever had.

Sitting there with Balot and Ayu really reinforced that mentality I recently discovered. As Balot said, its a process that will never stop forming and growing. My interview with Balot and Ayu was truly eye opening for me. Even on the other side of the world, people deal with the same problems and work through them the same way. When you enjoy the music you play, people around you will also enjoy it and feel the joy that you are radiating.

Thank you Balot and Ayu for an amazing day!

Made helping keep the beat 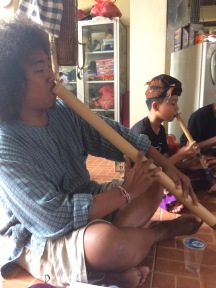 STORY TIME
-I legit fell in a hole at night on the way to visit my friend for dinner. Like Alice in Wonderland style. After falling and screaming and flinging my phone across the road, an Aussie man laughed because he thought I tripped, then I heard a “Oh shoot, shes like down”. Then his family came to help me and a nice Balinese boy came to personally wipe all the blood off my legs. Never have I thought that I had to use the excuse, “Sorry I’m late, I fell in a hole” ever in my life.
-Finding people’s houses in Bali is near impossible for me because 1) I was driving a little scooter everywhere and depending on google maps yelling into my ear, 2) there are streets that exist in real life, but Google doesn’t consider them to be real in maps, and lastly, 3) you have to watch out for herds of ducks that run through the rice paddies or dogs that decide to take naps in the middle of the road.
-I was mugged by a monkey at the Uluwatu Temple. I leaned up against a wall to attempt to take an artsy picture of another monkey and then I see a little monkey hand come across my face and take my glasses. Then he proceeded to eat my glasses and then a Balinese man came up to the monkey with a banana and threw it at the monkey and grabbed my glasses. Positive reinforcement. Spoiled little furry devils.